This week in Ms. Lewis’ Year 7 Spanish classes, students used Google Slides to create multimodal texts representing their answer to the question – ‘¿Qué hay en Hong Kong?’ (What is there in Hong Kong?). Students used some excellent Spanish phrases which they have been learning in class, as well as their own creativity in the design – and even some photography. Can you recognise any places or activities in Hong Kong?

Link HERE if unable to view.

Students have explored the piece “Gangsta’s Paradise”. This piece is structured in Ground Bass form, which features a repeating harmony and various repeating melodies. Max Miller has successfully created his arrangement, using MuseScore, in a stylistic manner that balances texture and dynamics with careful consideration.

Well done also to Summer Fay Sit (12B1) and Summer Jane Sit (10B2) who formed a Cadet Women’s Sabre team with two other teammates, and won a silver medal last weekend in the team event! 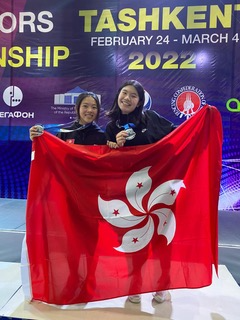